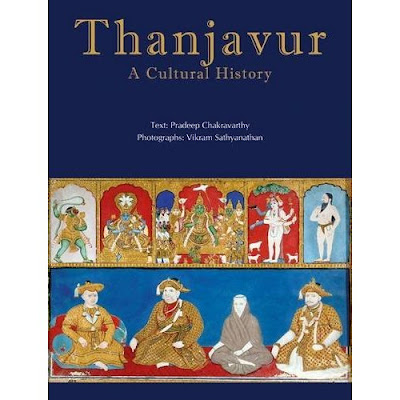 The book Thanjavur: A Cultural History intends to take you through the cultural history of Thanjavur. One of the prime cultural centers of ancient India, which as space has the credit of being a pioneer in many forms of arts. The most important of which being the Brihadeeshawara temple built by Cholas some 1000 years ago. Where the art forms like the classical dance of Bharatnatyam and the Carnatic music were probably born but definitely flourished.

When we think of Tanjore, we think of the built heritage of Chola kings. That towers above everything else in the region. This book takes you through the history of the region in rich Kaveri Delta. And gives the right due to all the dynasties that contributed to building this rich heritage. That contains brilliant architecture, fine classical dance, a musical tradition, inspirational literature, timeless poetry. Along with other art forms like wall murals, metalcraft etc. Author has brought forward the contribution of Maratha kings who ruled the region for a long time. And also took forward the cultural traditions set forth by their predecessors.

Besides the kings in their imprints, he also talks about the various scholars, literary figures, musicians and dancers along with their patrons and traditions. Making it a multi-dimensional sketch of the region. While also talking about the everyday life along the banks of river Kaveri. It is a well-researched and well-documented account of the culture of Thanjavur.

What I missed in the book is storytelling. It has been written more like a record book. Where the material has been sourced from various sources and put together making it a bit boring to read. It would have been a far more interesting reading if the author had comprehended all that he gathered, observed and experienced into a narrative. That would be as interesting as the subject itself. The editing of the book could have been better. Photographs and the texts do not match at places and at most places pictures do not match the text. Designed as a coffee table book, it could have had many more pictures that capture the vastness of the culture here. I would have liked some more maps to show the flow of history. The overall organization of the book could have been better.

Having said that it is a good chronicle of the Thanjavur and its culture.

Reading this book after reading a couple of books on Benaras recently made me think what is it about rivers that inspire people living on their banks to be sensitive and creative. Come to think of it the best cultures and creations have happened on the banks of rivers like Ganga, Yamuna, Kaveri in the known history. And in the pre-historic times on the banks of Saraswati where it is said the Vedic hymns were composed. Any ideas!

Buy this book – Thanjavur: A Cultural History by Pradeep Chakravarthy and Vikaram Sathyanathan at Amazon India.

As an Amazon Associate, AnuReviews earns from qualifying purchases.

Buddha in Gandhara by Sunita Dwivedi

The Rule of 5: Leadership & E5 Movement by Paul Dupuis

For the Love of Mandovi by Dr. Mohan Pai